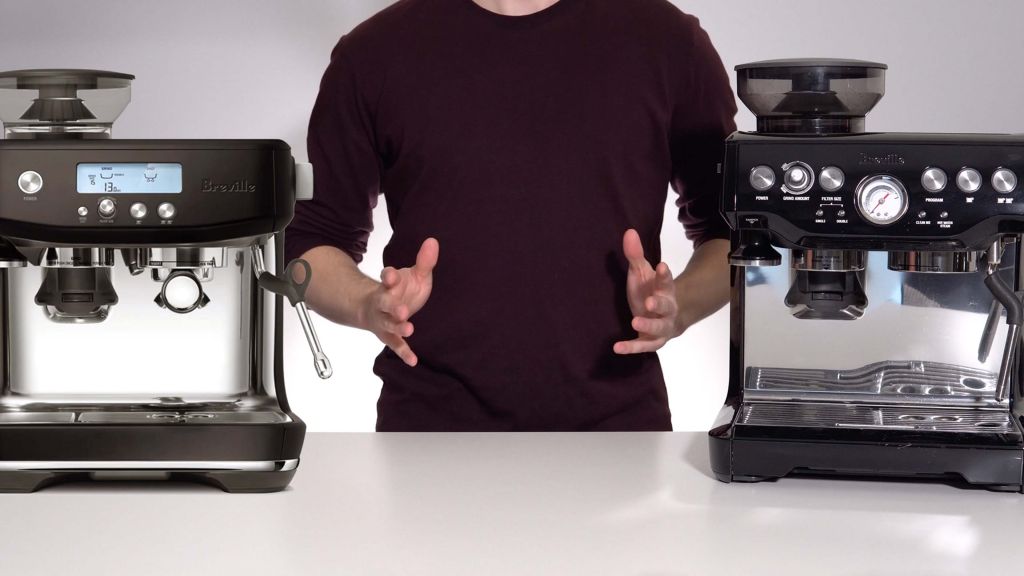 As you all know, I think that the Breville Barista Express is one of the best entry level semi automatic espresso machines currently on the market, and has been for quite some time now (I’ve owned mine for well over 4 years). However, Breville has recently released a new contender called the Barista Pro, which sits above the Express, but below the Dual Boiler in the Breville espresso machine lineup.

So, is this new Pro model worth the added price over the express? And if you already own the Express, should you consider upgrading? Let’s find out!! 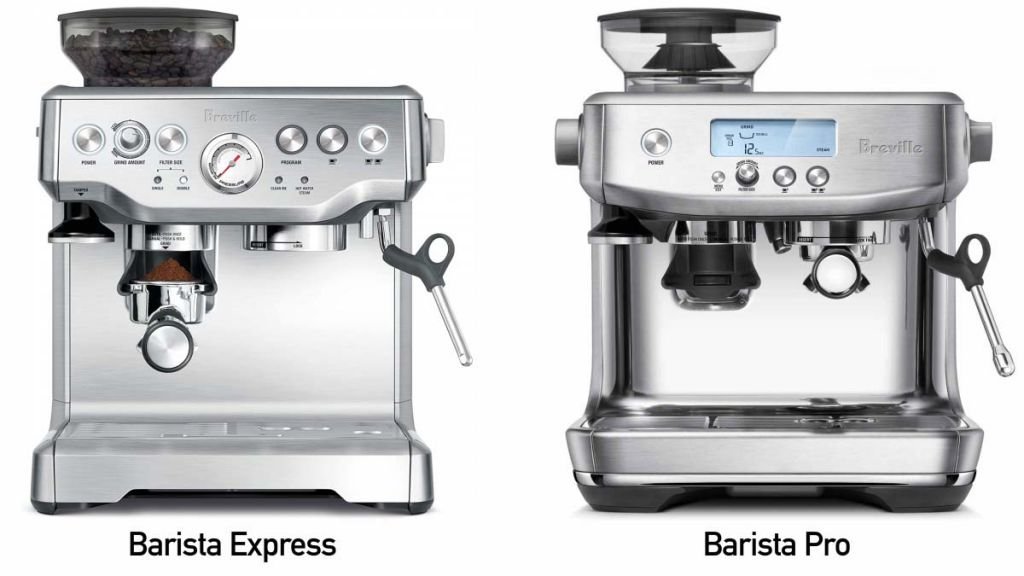 Looking at these two machines side-by-side, it may look like the Pro is simply a face-lifted version of the Express, but there are also some upgrades under the hood. Let’s dive into each of these differences one by one.

The first upgraded feature that Breville is bragging about on the Barista Pro is a new and improved thermojet heating system that will be able to get water up to full brewing temperature in 3 sec. Now let’s be clear, the Barista Express is already no slouch in this department. Using a similar thermocoil, the Express gets up to temperature in a little under 30 seconds, making it a great way to get hot water quickly for other things such as tea and porridge. 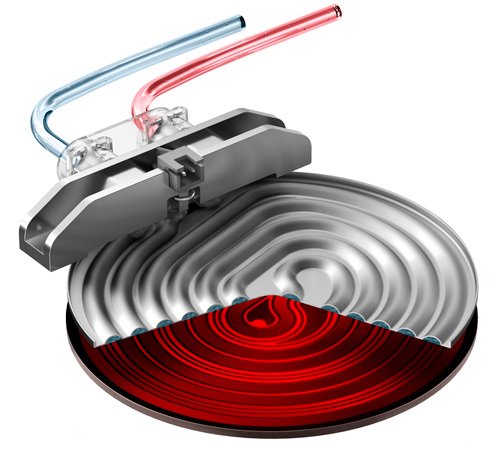 One problem I have with both of these quick startup claims, is that they are a little deceptive. In order to brew a quality shot of espresso, you also need to wait for the whole metal portafilter and spout assembly to get up to temperature. So regardless of how quickly these machines heat up their water, the process of heating up the rest of the critical brewing components will take around 15-20mins on both.

If the Barista Pro had included the option to schedule when the machine turns on, like on the Dual Boiler and Oracle machines, that would be a meaningful improvement. But alas, they did not. So while the thermojet heating is an innovative upgrade, I don’t see it as something that needs to be factored into a buying decision between these two machines.

Next up on the list was an improvement to the grinder. This was something I was very excited to hear, as the grinder on the Barista Express is arguably one of its weaker components.

On the Barista Express, the steps between grind stops can be slightly too large at times, meaning that making super fine adjustments when dialing in. On the Barista Pro, the grinder has smaller steps between each setting, giving you 30 positions to choose from instead of the 18 on the express. This should allow for better dialed-in shots, if you’re the kind of person who likes to play around…. Point for the Barista Pro. 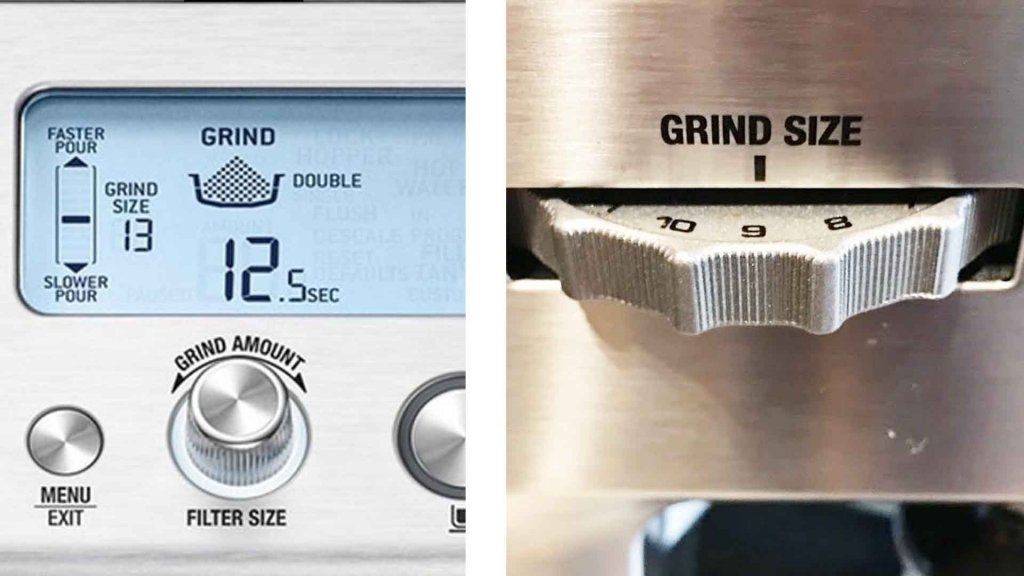 However, other than this change to the grind adjustment step size, the grinder itself actually remains effectively the same as found the on found in the Barista Express. This is a bit of a disappointment, as particle size consistency on the Barista Express did leave something to be desired, and for the extra money, I expected the Barista Pro to improve on the actual physical grinder components, rather than just the adjustment mechanism.

The next area of improvement also has something to do with the thermojet heating system, and that is steaming performance. Both of these machines are still single boiler, meaning that you cannot brew and steam at the same time. Once you’ve pulled your shot, you then need to wait while the machine heats the coil from brewing temperature, to steaming temperature.

With the new thermojet system, this transition happens much faster. So although you are not able to brew and steam at the same time, you don’t need to wait as long in-between. If you’re making one or two drinks, this transition time on the Barista Express will not be a big issue, but if you’d like to serve a large group of friends, the advantage will lean in favour of the Barista Pro.

A bigger improvement in my eyes is that the steaming pressure is improved on the Barista Pro, taking closer to 45sec to steam a full cup of milk versus 60sec on the Barista Express. This will again benefit you if you plan on serving drinks to large groups of people, less so if you’re just make yourself one latte each morning. 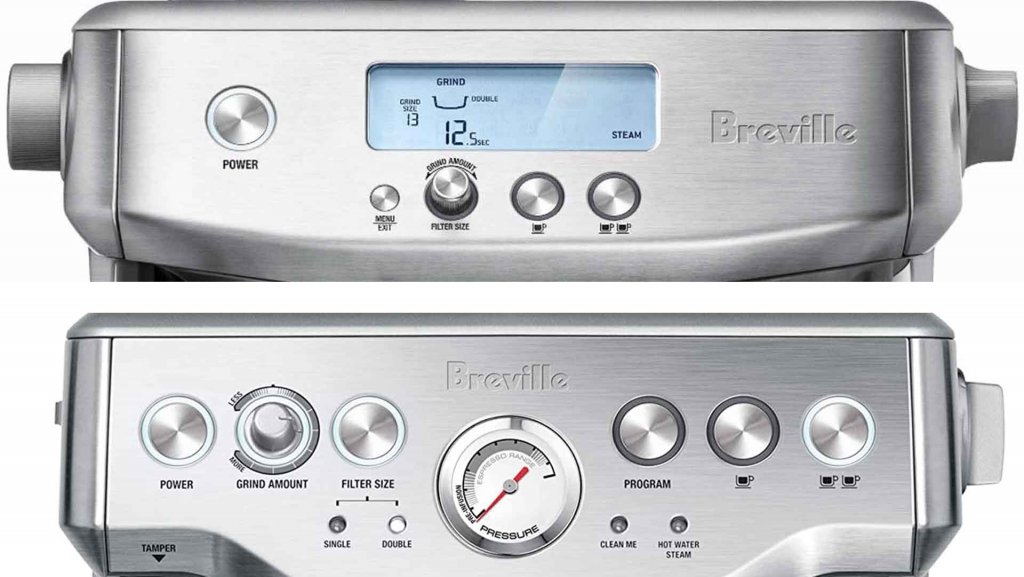 Finally we come to the most obvious change on the Barista Pro, and that is the inclusion of a digital display. This is a very nice feature to see as it puts all of the important adjustments at your fingertips. Brew temperature, shot timing, cleaning cycles… all of these things can now be easily and intuitively adjusted using the screen. The Barista Express offers the same range of options, but you will need to refer to the manual in order know which buttons to press and hold to change these settings. Ease of setup and dialing-in is a clear advantage of the Barista Pro due to this new display. Another point for the Barista Pro.

Once I dug into the all the details and changes on the new Barista Pro, I couldn’t help but feel a little underwhelmed with the incremental nature of the upgrades.

So, if you haven’t figured it out by now, my recommendation is that the Barista Pro is not worth the extra money, or worth upgrading over the Barista Express. While there are absolutely some improvements to the heating performance and usability of the machine, in my mind there weren’t enough improvements that will impact the actual quality of the final cup of coffee you’re drinking. 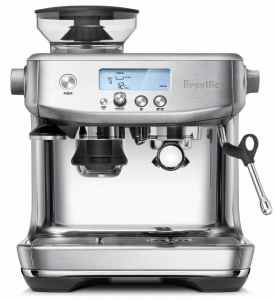